Recently, my parents moved house and I received a stack of my old notebooks, kept safe in the attic of their garage for over a decade. As a teenager, I had journaled pretty much daily, keeping the notebook down the side of my bed, writing late into the night. I remember these books as my closest friends, somewhere I could express, analyse and confide. I remember the joy of coming home to write about a good day at school and the catharsis of feeling the pressure release as the details of a bad one spilled out from my mind and onto the page. There were several occasions that something momentous occurred in my life exactly as I reached the end of a journal, and I had the feeling that this was my own private happy ending, that the sequel would be even better.

Reading back through these books wasn't quite what I'd expected, though. Where I'd anticipated emotional outpourings, I was met with meticulous analysis of social situations and friendship dynamics; where I remember the depths of depression there was only surface description of a challenging day at school. I'd used my notebooks not to process and grow, but to record and analyse - a place for me to try to piece together the rules of a world not designed for my neurodivergent brain.

I remember these books fondly because they were my anchor through one of the most turbulent times in my life. Whenever I felt untethered, there they were, waiting for me to come back to, openly accepting my inner dialogue. They didn't judge. They were always available. They didn't mind my compulsion to talk about the same thing over and over, turning it around in my brain until I had filled the page with my scrawled, messy thoughts.

But as the years passed, I found myself reaching for this way of catharting (is that a word?) less and less. I graduated, worked, changed jobs, met my partner, got a cat, moved house several times, had multiple mental health crises, all without expressing myself in written form. It was only when I discovered Bullet Journal one lunch break - a productivity method that would later become a lifeline and even later than that, the seed of a business - that I even began noting down anything about my life at all. In amongst everything going on, I still needed somewhere to take things from my brain and make them external, if not in the form of a traditional long-hand journal. 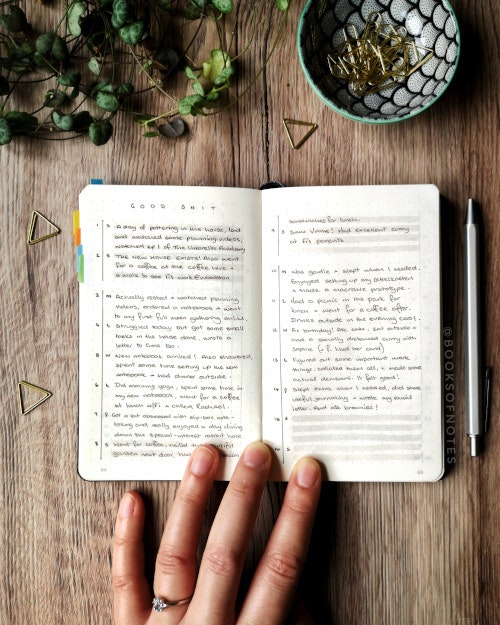 And then 2020 hit and suddenly everything was different. I found myself adrift in a sea of uncertainty and overwhelm. I felt an anxiety that was so pervasive - so chronic and all consuming in a way I hadn’t experienced before - that it was impossible to find my feet. Not that I was alone in this in any way. The world had suddenly shifted and adjusting to the so-called ‘new normal’ became a priority for the majority.

My usual response when challenge appears is to double down on my planning process. To strip everything back to essentials, figure out a basic, sustainable routine and then build up from there. But even though my days didn’t look radically different from their pre-pandemic counterparts (I was pretty much a house-human before it all, too), my usual approach just wasn’t cutting it. Routine didn’t stick. To-do items remained undone. There was a whole other person in the house to account for (Almost-Wife, newly working from home). I couldn’t concentrate on anything for longer than five minutes before compulsively checking the news.

There was too much going on in my head and planning alone wasn’t addressing it.

So, for the first time in years, I turned back towards journaling. This time, though, I knew I needed more than to record and analyse (goodness knows I was doing enough of that in my mind already) - I needed to actually start processing and moving forward. There was so much to contend with every day that I needed somewhere to get the thoughts out and start sorting through them. And I needed it not to feel like a herculean task. Something quick, something flexible and above all, something easy. This is a to-do I actually needed to get done.

Free-writing felt too much to start with, so I wrote myself a series of journal prompts to act as a catalyst. I needed something to bounce off, and I also needed something to literally prompt me to notice how I was feeling besides “anxious AF”. I have always been really bad at understanding how I’m feeling; I can usually gather whether it’s positive, negative or neutral, but find giving it a name beyond that is almost impossible. 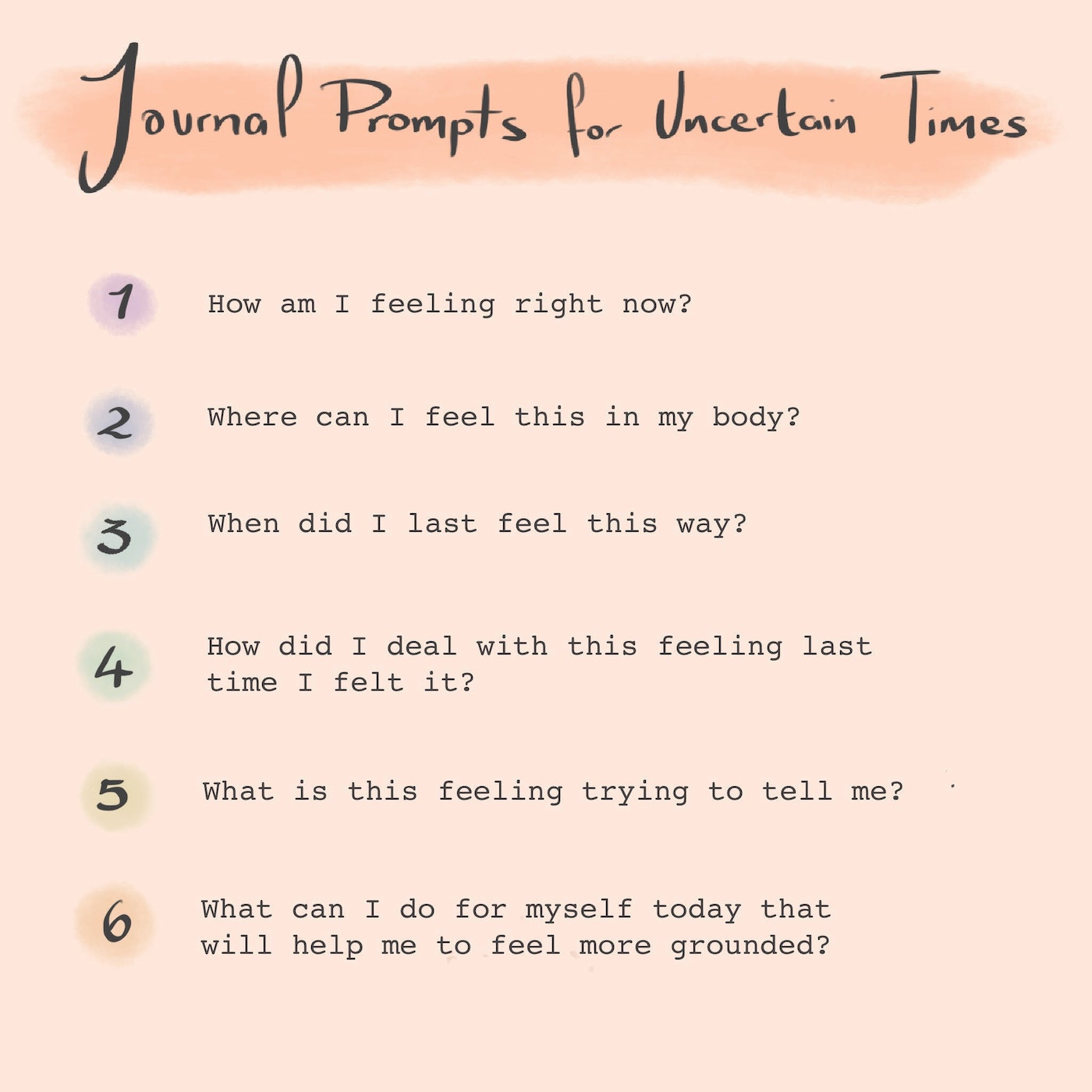 I began with a series of prompts to get me to begin noticing, with the hope of later understanding how I felt, where I felt it and when I last felt the same way. Physical sensation is often easier to identify, and giving it the context of when I last felt something similar meant I could not only start relating the feeling to events, but also understand that it would eventually pass (even if on multiple occasions my answers were “I feel anxious, it’s in my chest and I last felt this yesterday” for several days running). The prompts gave me a more concrete thing to do when emotion felt overwhelming - a quick way to hopefully calm and soothe but, failing that, to record and begin to process. They gave me a structure through which to see things and an easy way to begin building a habit.

One of the ways I often sabotage my own efforts is by going full-throttle at something, becoming tired of it quickly and then abandoning it. There are many times I've tried to begin a journal, waited until I had so much in my head I was about to burst, finally sat to write page after page to get it all out, only to never pick up the pen again. But journaling is absolutely one of those things where consistency is important - when you do it regularly and frequently, it becomes more than the sum of its parts. Instead of letting the pressure build until you’re about to burst only to open the valve and release a tirade of thoughts, you open it for just a little bit every day, letting off a little bit of steam each time and never letting pressure build up to unmanageable levels in the first place. The prompts allowed me to do just that; they were simple, undemanding and allowed me to write as much or as little as I liked each time. I could convince myself to do them because it was just as easy to do them as not. At worst, I was going to have slightly less in my brain than I had before.

I can’t pretend that some simple prompts changed my ability to deal with a global crisis. But they did offer some stability and enabled me to see what was helping and what wasn’t. Slowly, I added more things into my day that were the former and took out things that were the latter. I began understanding my feelings a bit better. I found calm in a daily practice of writing, no matter how long (or short) it was. Concentration came back slowly. And when the anxiety flared up, I had something to come back to, a basic way to acknowledge, contextualise and process.

I think the biggest factor in the success of this new habit was simply allowing myself to be messy and inconsistent about it. I didn’t make myself do it every day if I didn’t want to and I didn’t beat myself up about it either. It was top of my list of things to do that helped, but it wasn’t the be all and end all if it didn’t get done. Sometimes I’d miss days in a row, but the important thing wasn’t that I hadn’t done it - it was that I came back to it, every time, again and again. 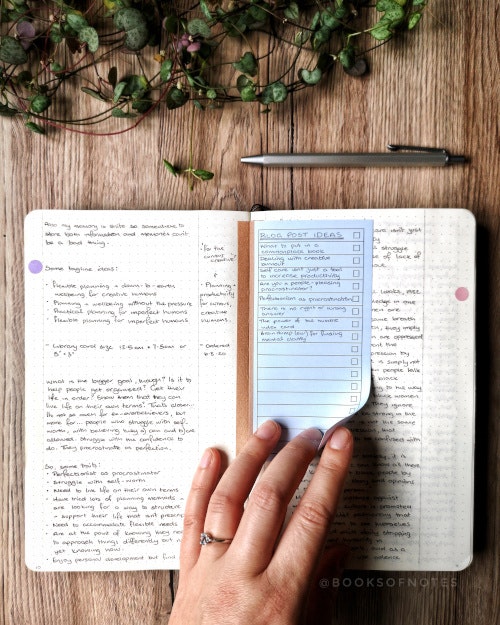 Starting (or coming back to) a journaling practice can feel somewhat overwhelming and I think a lot of the time it’s because of the expectations we hold about it - that it needs to take time, that you ‘should’ do it because it’s ‘good for you’, that you need to hand write pages and pages until your fingers cramp for it to be worthwhile. But the only thing journaling needs to be is whatever you need it to be, and that can be anything from “I want to process this really complex life event I’m going through” to “I want to record what happened today” to “I just really like using stickers”. It need be no more than that. It’s something that you and only you can decide - what do you want to get out of it?

And no, you don’t need a whole new notebook to get going either (though it is a great excuse!). Start in your current Bullet Journal or planner of choice. Sure, start a new page for it if you like, or just pop in a note signifier and write a couple of lines. It doesn’t feel all that different to what you’re doing already, does it? Because it isn’t - you’re just doing it with a slightly different goal in mind. Eventually you might end up in a different notebook, sure - but starting in this way, starting small, gives it a chance to become the norm without the need for commitment. It’s as simple as making a note.

Remember that, above all, you’re doing this for you, so do it in whatever way works for you. Start small - make it almost too easy to do. Write one line. Answer one prompt. Note down how you are feeling in a word. Get into the rhythm before you pad it out - not only does it build a habit but it gives you time to explore what works for you. Remember when you started your Bullet journal and you included every tracker you could find, had yearly, monthly, weekly and daily pages, had spreads to log what books you read and films you watched, tried out every hack under the sun and got so overwhelmed with it all you gave up on most of it? This is the opposite. Start from the basics and build up from there. It’s the quicker (and less disheartening) route to the journal equivalent of the elusive ‘planner peace’.

1. How am I feeling right now?

4. How did I deal with this feeling last time I felt it?

5. What is this feeling trying to tell me?

6. What can I do for myself today that will help me to feel more grounded? 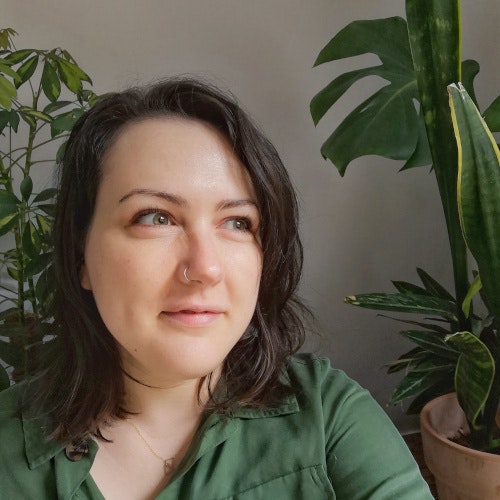 Kat Cuthbert is a writer, planner and photographer from the UK who has been Bullet Journaling for almost 7 years. She helps creative humans find their feet through planning and journaling, figure out their purpose and begin working towards it in whatever messy, imperfect way they need to. You can find her at booksofnotes.co.uk or on instagram as @BooksOfNotes. She also helps creative businesses make their work more inclusive and accessible as @KatCuthbert.